Dorsets Simon Heaps still pushing on, on the international stage Harold Feltham, at ‘only’ 90, cannot quite match Ken’s age record, but he can claim to have played in the Bournemouth League since the 1947-48 season.

The former self-employed decorator has not been able to play this season because of a breathing problem, but has been running a team in the fifth division.

His career started in a local youth club and Harold said: “I won tournaments there, and a friend invited me to the league. In my second season, I played in the second division and only won four games that season and quickly came down to earth.

“Just after the war, there were three divisions and a junior division, and within about four years we were up to 30 teams.

“We were in a church hall in Throop, with parquet floor and a handmade table which was three equal pieces of inch-thick mahogany put together. We had to watch the area either side of the net where they joined and the bounce was different.

“The lights were gaslights but they were quite good. We were there about 10 years and we had to leave because they turned it into a bungalow.

“By that time I was secretary of the club and one of the committee members suggested the community centre at Kinson. We moved up there and we were there about 40 years before we were squeezed out and landed up at Winton YMCA.”

A cricketer and a cyclist in his younger days, table tennis is the one sport which has endured.

He said: “I was a keen racing cyclist in my 20s and when I was in the Army for National Service, I was posted to Blandford, which was only 20 miles from home, so I used to cycle home to play a match and then cycle home afterwards. I thoroughly enjoyed it because I used it as a training run for my racing.

“I also played cricket and bicycle polo in the national league, which was exactly the same rules as with horses.

“I’ve had a diverse life but table tennis is the sport I’ve always stuck with. I’ve been really lucky and always enjoyed myself.”

Harold was also coached by former England international and national champion Bryan Merrett, which has led to him helping his twin sons, Alistair and Duncan, to compete at the Special Olympics.

Harold said: “Bryan Merrett came down to Bournemouth every 6-8 weeks and coached 20-odd county juniors, and for two years I went along for coaching sessions. Bryan and I became quite good friends and he encouraged me to take my coaching badge.

“I thoroughly enjoyed it and I managed to help a few people after that. It helped me when I was coaching my two sons, Alistair and Duncan, to the Special Olympics.”

The family, including Harold’s wife Sheena, went to Shanghai together and the boys also competed in Tokyo, Antwerp and Dublin – Alistair won silver medals in singles and doubles in Dublin

Harold added: “They played each other in the final of one of the groups at the European Championships in Antwerp, a match that was covered on TV.

“As a result of their ping pong, they have seen a lot more of the world than most of us and it was a good by-product of my coaching with Bryan.”

On his career as a whole, Harold says: “I enjoyed it and had a lot of pleasure and made a lot of friends.

“This is the first season I haven’t played, but I have been coaching. I want to try to improve my breathing for next season.

“The NHS has also helped keep me going. I’ve had two knee replacements, a kidney removed and I had a stroke a year ago, so those chaps have kept me going.

“All I do is turn out and thank my lucky stars.”

Harold with his wife and sons at a Special Olympics event

Image and report taken from the Waterside TTC Website. 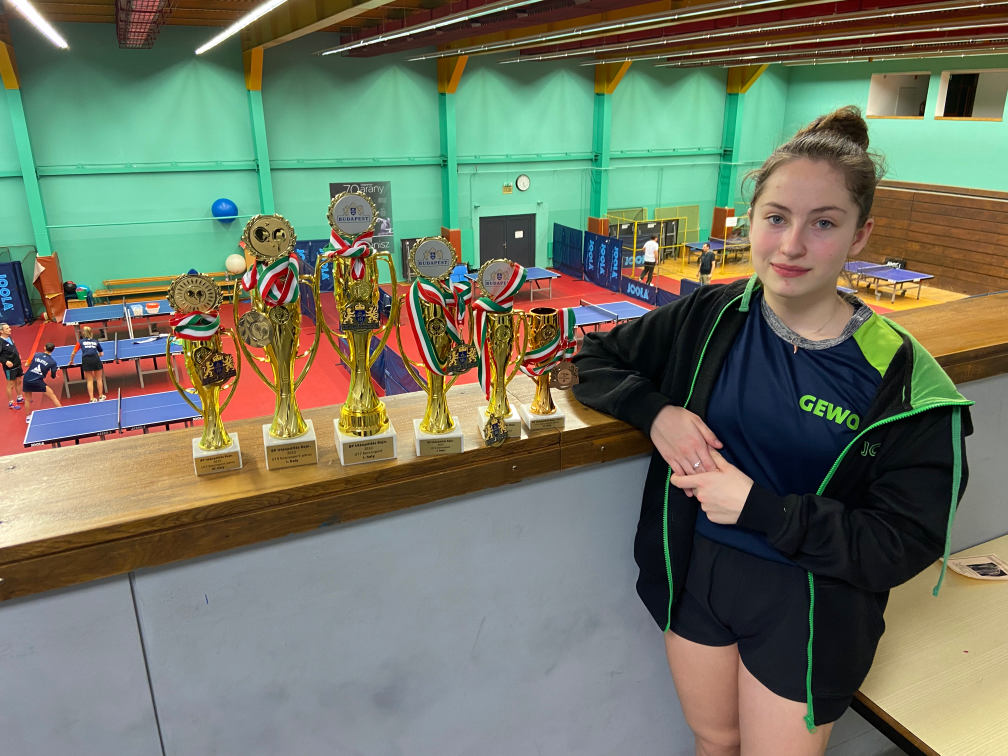 Sophie Barcsai, 12yrs old and current World Ranked number 11 U13 girl, started 2022 with a dazzling display in Budapest. Sophie who represents Hungary in international competition and the Statisztika Club of Budapest and Waterside TTC, completely dominated the Hungarian National – Budapest Championship with an outstanding performance.

Having travelled from England with father Lazlo Barcsai and coach Ken Macleod her goal was to win the U13 Championship and play well in all the other events. She did exactly what she set out to do, and did so in emphatic fashion. Having secured the U13 title she then took the U15 title which no player in Hungary had done before. With no pausing to celebrate, Sophie dominated the U17 event in the same fashion and added that title to the earlier successes. In the doubles together with Nora Dohoczki she added the U19 Doubles title and bronze in U15 and U17 doubles.

When Interviewed by UTLANPOTLASSPORT of Hungary, Sophie told them her main goal had been to win the U13 Title and the other titles were not ones she had expected to win. “I was very happy with the results, it’s always good to see that the hard work is worth it”.

Sophie is now focusing on International Competitions coming up in Tunisia and Belgium and more training in the coming months.

Image and report below taken from the TTE Website. 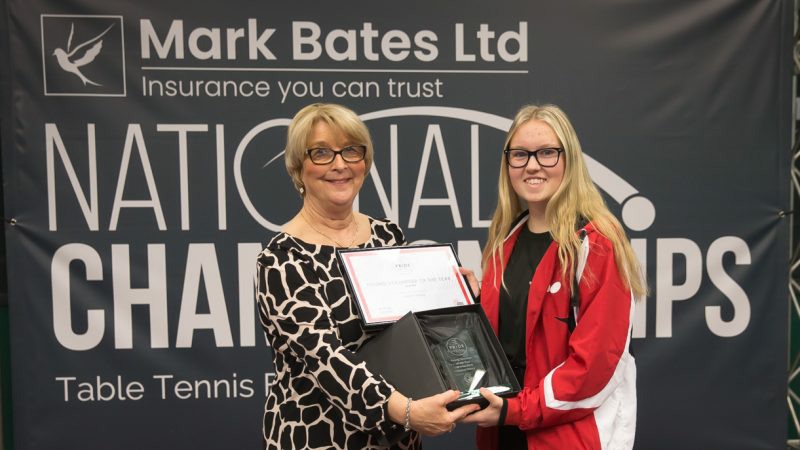 Volunteers shared centre stage with national champions as the Pride of Table Tennis Awards winners were presented on Finals Day at the Mark Bates Ltd National Championships.
The shortlisted nominees in both the Volunteer and Young Volunteer of the Year categories were given VIP treatment at the Nationals and the winners were announced in front of hundreds of spectators.
First up were the nominees for the Young Volunteer of the Year, which recognises a volunteer under the age of 25 who has made a significant impact within a club or league in the past 12 months.
The award went to Sophie Storey, who was nominated by Neil Hardisty for her commitment to table tennis in the Weymouth & District area, where she has made a significant contribution to encourage people to play table tennis, most notably being an important member of the 'This Girl Can' sessions and organising the inaugural youth presentations for Weymouth & District League.
The runners-up were Vishaal Sharda from Knighton Park TTC in Leicester and a trio of youngsters from Wensum TTC in Norwich Ed Horton, Kelsey Fordham & Ella Barnard.
Sophie, Vishaal and Ed were also presented with their certificates for reaching 50 hours of volunteering under our Young Ambassador programme. 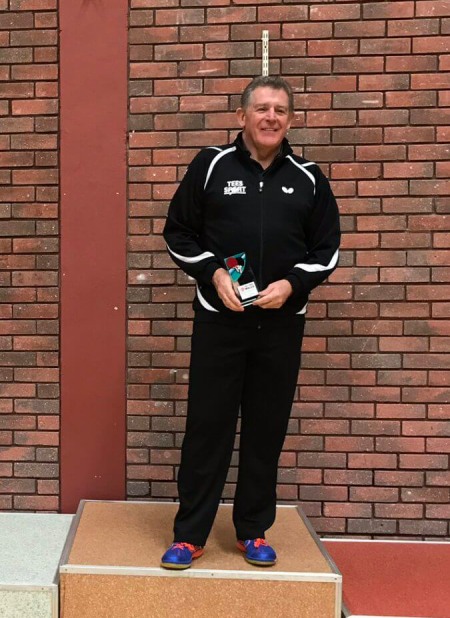 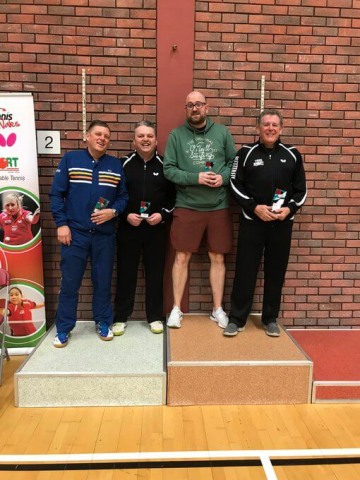 John played in the Vets for Dorset on Saturday, then drove to Cardiff to play in the Welsh National Championships where he won the over 60's individual and the Vets Doubles with Owen Clutterbuck.

John Hook won the Over 60 singles defeating Ray Goulding in the final. Congratulations John on being Welsh Champion 2020.